Creating and Defending a Modern Maroon Space - Garifuna in Focus

At a time when people of color are experiencing shocks from multiple planetary pandemics, modern-day maroons are thriving and resisting under extremely adverse conditions. The Garifuna – an afro-indigenous ethnic group that traces its roots to Carib and African former runaway slaves who were forcibly removed from the island of St. Vincent in 1797 – are emblematic. Their resilience offers a reminder of the connectivity and ingenuity of what movements can look like when grounded in land and place, ancestry and memory, and collective strategies for community empowerment and protection.

The Garifuna have waged, and been subjected to, many wars. Since the 18th century genocide in which almost half their population died before being relocated to the Caribbean Coast of Central America, Garifuna people – also known as Garinagu – have faced constant violence. They have responded with vigilance in their struggle to retain their foothold in this homeland. 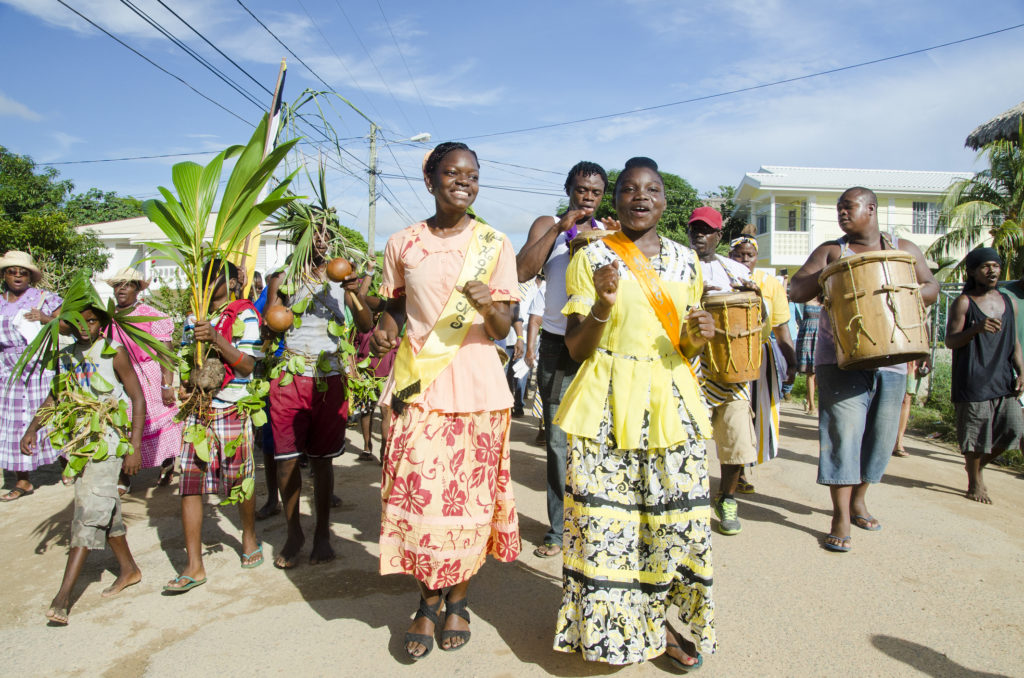 Organized crime – inflamed by the 2009 coup – has appropriated more than 80% of territories traditionally inhabited by Garifuna people in Honduras (Grassroots International). Mega-tourism and real estate development projects funded by the Honduran government, World Bank and international investors have fallen into a long pattern of supporting neoliberal policies in indigenous lands, fueled by the expansion of agrofuels plantations, the exploitation of oil, and resulting coastal erosion. Indigenous communities’ resistance has resulted in murder of indigenous Honduran activists across the country, like Berta Caceres, as well as those from Garifuna communities.

How, through all of this, has land remained such a grounding force in the Garinagu’s liberation ideology? Garifuna cosmology recognizes supremacy of ancestors and Mother Earth as a unifying force for communal advancement and their political ideologies ground Garinagu in the land’s productive use. Moreover, the cultural expressions, language, and culinary traditions that the Garinagu have upheld for centuries have enabled them to wage cultural warfare on all levels–and these remain rooted in the land. The activism that has emerged along the coast has over time built a wellspring of holistic strategies for achieving land security, food security, community cohesion, health, and wellbeing.

Despite legal recognition of their land rights by national and international authorities, frameworks needed to protect Garifuna areas from land grabs, harassment and criminal incursions, and climate and development induced land erosion are failing in Honduras. In addition, while international development agencies have contributed to efforts to title the land in many communities, economic support for local agricultural and educational initiatives has only scratched the surface.

In this context, Garifuna leaders have had to be creative, resourceful, and unflinching in the fight against the systematic displacement. In 1998, Hurricane Mitch – which destroyed 70% of Honduras’ country’s crops – dealt another devastating blow to the region, eroding livelihoods, forcing massive economic migration, and increasing vulnerability particularly among women and children. Women-led groups like the Garifuna Emergency Group of Honduras responded with disaster-resilient food cultivation and agricultural planning methods that were centered over time within broader community development and movement strategies. (Keri Vacanti Brondo, Land Loss and Garifuna Women’s Activism on Honduras’ North Coast.)

In recent years, reclaiming and recuperating the land has become paramount. In Vallecito, a remote village of 980 hectares carry out regular patrols and daily subsistence farming. They are led by about 100 Garifuna land defenders who have come from territories throughout the country to live. Vallecito, the Garifuna’s oldest ancestral sites, has become a critical site of resistance in the face of constant attacks to the Gariniagu’s very existence.

With the threats to land sovereignty increasing over the past four years, the Black Fraternal Organization of Honduras (OFRANEH) – an organization run by Miriam Miranda – has also mobilized effectively to maintain a steady encampment along the borders of Vallecito. Garifuna leaders have incorporated cultural and spiritual rituals into their work to mobilize communities to defend the coconut farming greenhouses situated on the land against increasing threats, including armed incursions and intimidation tactics.

For Garinagu, food sovereignty is not only an ancestral inheritance; it is at the center of their ancestral land defense strategy. Through the exchange of traditional knowledge, women’s groups have begun to rescue and plant ancestral foods such as coconut, cassava, and plantain which serve as sustenance and a symbol of Garifuna identity and are often used in spiritual rituals. Local farmers have intensified the production of coconut trees, which provide many vital byproducts, such as coconut cream and oil. Since the project began, they have prepared tens of thousands of seedlings and planted hundreds of trees. (Grassroots International, Land Reclamation and Food Sovereignty at the Center of Afro-Indigenous Ancestral Territory Defense).

Expanding from self-sufficient crops to economically generative ones, an intergenerational Garifuna Women Producers Cooperative known as Barauda has initiated a cassava facility to market and sell their crops nationally and internationally. Across Garifuna villages, from Honduras into Southern Belize, a number of community organizations also engage in reclaiming land for community gardens to produce organic vegetables, plantains, rice, corn, beans, and medicinal plants and are working to reclaim ancestral lands from landholders who are planting commercially.

The ultimate goal is to move beyond protective strategies to build alternative food systems and return to fully productive use of the land.

As in freedom traditions throughout the diaspora, spirituality is interwoven into a common understanding of community protection. For example, even in OFRANEH’s COVID 19 emergency relief work – through which it established health centers – the organization worked to promote and share traditional plant knowledge, leaning on their deep wellspring of cultural assets and involving elders even while they were isolated. Youth were also at the forefront of health education strategies that employed the Garifuna’s ancestral music, dance, and folklore.

This centering of ancestral memory and spirituality in food and land security programs is critical; it enables Garifuna people to center ancestral legacies and values, and most importantly joy, in the struggle.

Maroon societies like the Garinagu have spawned wisdom that many revolutionaries have modeled, they have recognized that people who are organized are more protected. Activists in settlements like Vallecito, Tela, Trujillo and La Ceiba have been trying to maintain resistance against the coup and unite all of the movements in a strategic national agenda. Local leaders are working to involve students, unions, peasants, afroindigenous people in  what they are calling “La Plataforma de Movimientos.”

Grassroots International has been working with Garifuna organizations through a strategy that seeks to build the capacities of partners to organize, do service-driven work, build alliances, and strengthen their organizational and political engagement capacity. Notably, international supporters have also invested in OFRANEH’s strategy to build relationships with grassroots feminist organizations such as The National Coordination of Indigenous and Black Women of Honduras (CONAMINH). Given the role and impact of displacement, disaster, and climate change on women’s security and livelihoods and in particular the historical leadership of Garifuna women, there is room for the establishment of strong alliances around emerging Garifuna land defense and anti-displacement strategies.

Maroon cultures are hardly a relic of the past. In truth, the Garinagu’s history has served and still serves as a foundational lesson in the power of a unified movement of Black and Indigenous peoples across demographics and geographies. This heritage includes equality, spirituality and embodied land struggles.

From October 22 to 25, the In the Spirit of Mandela Coalition convened an “International Tribunal” at the Malcolm X & Dr. Betty Shabazz Memorial and Educational Center in New York City in an effort to bring political will and legal muscle to end U.S. violations of the human rights of U.S. held political prisoners and broader societal attention to this record of human rights crimes..

The group, which has gathered under the banner  #WeChargeGenocide, comprises organizers, academics, clergy, attorneys, and organizations committed to working together against the systemic, historic, and ongoing human rights violations and abuses committed by the USA against Black, Brown, and Indigenous People.

The initiative has been seeking to achieve reparative justice and free all Political Prisoners for over a decade. As Muntakim noted in an interview with the Amsterdam News, international legal advocates interviewed several political prisoners — including Leonard Peltier, Sundiata Acoli, and Veronza Bowers — over 50 years ago. Some of them are still in prison today. During this year’s convening, nine jurists presided over an independent “tribunal” that included two days of testimonies from victims, expert witnesses, and attorneys. The results will be shared with a wide range of stakeholders toward the development of educational and legal resources. 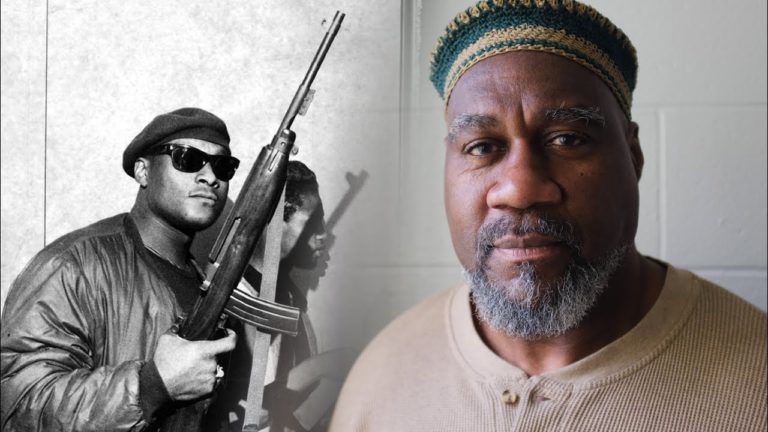 As Jalil Muntakim, who spearheaded the project, noted in an interview with the Amsterdam News, international legal advocates interviewed several political prisoners — including Leonard Peltier, Sundiata Acoli, and Veronza Bowers — over 50 years ago. Some of these leaders are still in prison today.

Muntaqim, the author, former political prisoner, co-founder of the National Jericho Movement to Free All Political Prisoners, spearheaded the initiative. “The world is waiting…for us to end the violence,” he said. “For us to understand that charge, we have to come into our own thinking and come to the determining factor that we are our own liberators,” he said.

Muntaqim spent nearly 50 years in the prison system, where he continued his activism, mentored other prisoners and maintained the highest level of discipline and integrity in the face of solitary confinement he experienced in Attica Correctional Facility.

On August 5. Muntakim served as the guest speaker for a powerful gathering for the launch for Breathing the World Anew, a collection of 90 poems written by organizers during 10 years of their participation in the Black August haiku tradition. He delivered a message of faith in the power of a relentless revolutionary spirit and shared his experience as a strategic, creative organizer for Black liberation. Lifting up his identity as a “New Africanist,” he shared stories about the ancestors at his back and the migration and renaming of his descendants. He spoke about the Pan-Africanist dialogue between the Black Panthers and Garveyites and the ongoing struggle to decolonize the mind.

Centering the importance of writing and reclaiming our stories, Muntakim treated the audience to an impromptu reading of his poetry:

The apple pie is not in my eyes

Because I see clearly now

The rain is gone

Yeah the rain is gone

My vision is no longer clouded by the propaganda

And the pledge to allegiance.

Since 1867, the enactment of the 14th amendment

Who knew it would take this long

to put an end to this madness

Since the enemy has an outpost in our mind

On the shoulder of our ancestors

No, we don’t have history in our minds

It’s being removed to the outhouse

Where nothing remains but their remains

Unclaimed by the next generation

Unable to navigate to the shores

Because the enemy has an outpost in our mind.

To learn more about Breathing the World Anew and order a copy, go here. Proceeds from book sales will go to SpiritHouse.

To lend your voice and your donations to these freedom campaigns, see below.