Year of the WomenX:
A Conversation with Charlene Carruthers

Charlene Carruthers is a strategist, author and a leading organizer in today’s Black liberation movement. She’s a BOLD Alumni – Classes of 2014 and 2017. As the founding national director of BYP100 (Black Youth Project 100), she has worked alongside hundreds of young Black activists to build a member-led organization of 18-35 year olds dedicated to creating justice and freedom for all Black people. She is the founder of the Chicago Center for Leadership and Transformation. We spoke with her about the 2020 election cycle and her future directions. 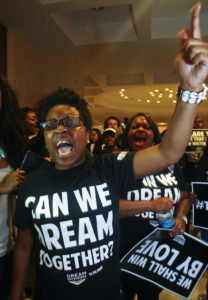 Nyasha: What work is grounding you at this moment?

Charlene: I’m currently a first-year Ph.D. student in the department of African American Studies at Northwestern University. And honestly, I’m just getting into the groove of focusing on my intellectual work and being trained as a Black studies scholar. I’m excited to become a part of this field. While it is a part of a tradition and there is a broad constellation of thinkers and doers that live both inside and outside of the academy and in between – it’s a field that is open with possibility. And I find myself feeling very good and excited about being able to explore relationality among Black people, how Black people govern and…what can we learn from historical instances where Black people are in spaces and fight for opportunities to govern themselves. What can we learn from those things today as we are working towards transforming the world, working towards abolition, working towards self-determination, and governing ourselves?

Nyasha: Can we talk about the women’s voices that rose to the center of conversations about electoral power in this election cycle and how different kinds of leadership both locally and nationally have moved women’s civic engagement or their agendas forward?

Charlene: The historian in me is really clear about this long tradition of this work. Black women have always been involved in politics in this country. Even as Black women were subject to chattel slavery, our lives and our experiences have always been in the realm of the political. And we’ve been impacted by and struggling against politics in the U.S. And what I know is that we’re a lot sharper than the dominant media narrative will give to us. They think we just show up for Democrats just because we want to save everybody, but we really show up making decisions based on our survival and strategic decisions about how we can help shape the terrain out in the world so that we can live lives with less suffering and less violence.

I think that shows up very clearly in the electoral realm. But then we also do other work that is about more than just survival, about more than stopping or slowing the bleeding; it’s about ending the bleeding all together, ending the suffering, ending the oppression and creating a different world. Black women are not a monolith, so I think that many of us fall across a spectrum of what we think is necessary in order to create the kind of world we want to live in. In this cycle we saw that come to the fore. Not all Black women were rooting for the same candidate. There were groups of women voting for different candidates.

And ultimately Joe Biden and Kamala Harris won. That’s not who I supported, but at the same time, that’s who I voted for. That choice was made because I love myself and my people enough to make a decision even when it’s hard to do so. This is still a settler-colonial project and people are running to be the next president of the US empire. And I’m clear about that.

Nyasha: How else did you get involved this time around?

Charlene: In this past cycle, I actually decided to engage directly in ways that I had never engaged before both locally and nationally in the primaries as a member of the [Black Women Force? Steering Committee.] So through that work, we engaged women and gender non-confirming women across the country. We talked to hundreds of people; we surveyed folks and people decided to endorse Senator Elizabeth Warren. And ultimately she did not win, but for us it was an opportunity to be able to push a very prominent national politician on issues that mattered to us and our families and communities. It was an experiment and we learned a lot along the way. We are trying to work our way through a system which is definitely not designed for us to thrive in.

Because of Black women’s and Black feminist activism and organizing in this country, it’s no surprise to me that we’re at this moment. What is troubling though is that in many ways it is lip service and in many ways the work is nowhere being done. Because they can say trust Black women, support Black women, and we still need to see material changes in our communities that we deserve.

Nyasha: Elizabeth Warren was able to move the needle on a number of issues. She was perhaps even more effective than Bernie in bringing conversations about foreign policy, immigration, and the U.S. failed trade and economic policies to the fore. Do you feel that people were ready to create a new paradigm?

Charlene: Well, Elizabeth Warren was organizing into her political positions. And just as she used her presence and platform to push and move Bernie Sanders and other candidates, people pushed and moved her internally on these issues. People talk about how she used to be a Republican. But I’m like, we were successful. We actually moved somebody. That is something we want to see more of. That is something that a lot of white women wouldn’t do – change their positions.

Nyasha: So now, how do you reconcile those progressive wins with the shared values among women and more marginalized groups, in terms of gender and reproductive justice issues? And how do people play together and talk together now? Does that happen outside of party politics?

BYP 100 did a direct action in the House Finance Committee meeting three or four years ago but they weren’t talking about this then. We were literally calling on divestment from policing and investing in Black futures and Black communities, and we weren’t the first to ever talk about this. Of course, there is a history to police abolition, prison industrial complex abolition, but in BYP 100 we intentionally started to work on this in 2014 or so, both locally and nationally. And so they were forced because of the mass uprising this summer to actually respond and take it into account.

Nyasha: I’m also trying to understand why Stacey Abrams accomplished what she did. Not only how she was able not only to mobilize voters, but how her efforts made people see themselves in a way that truly created transformation. And how that work stands alongside all of the efforts that were not part of the Democratic project but were more about building power. I’m thinking about what she accomplished and what the relationship might be to some of the other efforts on the ground.

Charlene: I don’t work in Georgia. But I do remember the first time I met Stacey Abrams.in Georgia …What I noticed about her then and I think what is continuing to happen now is her emphasis on relationship-building. And she built an organization to be a vehicle as a part of a broader ecosystem in the state of Georgia. And that organization has a very set focus, but it is in service of the work that was happening across the state. And those are not her words, but it is how I understand it, because what is the sake of the vote? It is not just to vote, but it is to create at minimum the kind of terrain we want, and at best conditions that we want to live within. And so Fair Fight Action does what it does. It doesn’t do what SONG, Mijente, New Georgia Project, do. There’s some overlap, but they have a very distinct mission. And so I think that that aids in their ability to do the organizing.

And the second part of that is the coalition that was built from her gubernatorial campaign. That has carried over. She should be Governor of Georgia right now. She would be Governor of Georgia if it weren’t for voter suppression. And so the organizing that she and her people have done since … all allows people to still be willing to show up and be in relationship with Stacey Abrams and Fair Fight Action.

Nyasha: What would you do now if you were Stacey?

Charlene: I’d go back for what I want. If she still wants to be Governor, if I were her I’d do that. But I’d also sit down somewhere and read a book. She also deserves rest.

Nyasha: We have also seen so many people coming in from the margins – and organizers in the South in particular – coming in and changing conversations around gender, reproductive justice, prison conditions, racial justice, to make the narrative reflect a broader reality. And now there is this lip service to inclusion. But we are not there yet. Are there unique opportunities now for the kind of leadership coming out of the BOLD network?

Charlene: All of the things that we have been trained in and practicing in BOLD – if people haven’t practiced it in their lives, now is the time to do it. It wasn’t just a rhetorical exercise. We weren’t just working toward embodiment for the sake of it looking good. We need to be taking time to reflect and take into action the things we have learned, the things that we have practiced, because they actually work.

We see a lot of that in movement now. What I remain concerned about is how we relate to one-another, and so what practices can we glean or take up and enhance that we’ve learned from BOLD in how we treat each-other… and so how we are is really important to me. Because if we are talking about building this world beyond carcerality and beyond prison and police and punishment, now is the time to practice how we want to be with each-other. How are we practicing the things that we’ve learned not only in our organizations but in our friendships, in our intimate relationships, and with our neighbors? It’s very hard to put into practice what we say we say we believe in. I think it’s actually Mariame Kaba, who said our work should be to try to narrow the space between our values and actions. How can we continue to do work to narrow the space between these two things?

Nyasha: What do you see on the horizon for your work?

Charlene: I’m trying to learn how to be responsible with both the things I learned from movement and the things I’m learning from the academy. I could easily live-tweet classes or everything that I’m reading. But I think that’s really irresponsible. Because it’s not the same thing. Just as it would be irresponsible to bring movement into the academy – it doesn’t evenly translate. And so for me it’s figuring out what I want my work to look like over this next phase of my life. And I want to continue to create things that honor Black people’s history and fullness with all its contradictions. And to create things that are beautiful. That’s what I’m out for. And that’s a part of my commitment that I’m continuing to work within.