CENTERING THE SELF
WITH JANVIEVE WILLIAMS COMRIE

Janvieve Williams Comrie is a Black Latina human rights strategist, trainer and organizer with a deep commitment to assist in the building of powerful social movements for racial justice and human rights. She has worked in a variety of fields and for several human rights institutions, including the Office of the High Commissioner on Human Rights Regional Office Central America, where she coordinated a regional program on race and racism. Janvieve is internationally recognized for her work with Afrodescendent communities. She is a Soros Equality Fellow (2018-2020) and the Executive Director of AfroResistencia. 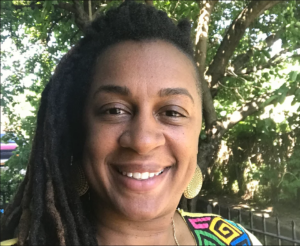 AfroResistance (AfroResistencia in Spanish) grew out of The Latin American and Caribbean Community Center (LACCC), which was formed in 2004 as a community based organization to address the diverse political, economic and cultural needs of the growing Latino and Caribbean populations in the United States, with a special emphasis on the most marginalized of the Latino community – African Descendent and Indigenous people.

Who are your ancestors?

My ancestors are really powerful because they’re in me. Some are Perlina and Paulina Fogarty, Germaine ‘Girly’ Comrie, Granny Berta and Jorge Comrie. I have to name them … I think about my great-great grandmother and how more than likely she was enslaved. And I’m thinking about how tender my body is and just how the thought of somebody hurting my ancestors in the violent ways that we know that most of our ancestors were hurt, it’s just really painful for me to think that for any of our bloodline, their bodies were not honored as they should have been. And it also connects us to the harm that we do to each-other in different ways. And I carry that pain too in my body too.

And I see it within the kids, how free they are, and how secure they are. And I keep thinking, will I do anything unconsciously that will end that for them, because I have trauma that I’m living through that I haven’t been able to identify or address?

What healing or centering practices are you engaged in, and how are they evolving in this moment?

The pandemic has been hard. But now I have a structure that’s more solid and feels like it won’t fall … I have been centering more on myself for the past month and a half. And I’m in a more reflective space and in a more creative space. We’re barely taking care of ourselves in a way that’s integral for our well-being, for me personally I was not taking care of myself until very recently. I meditate on a daily basis. I pull tarot cards in the morning…so I can read my day a little differently and not make rash decisions…I also enjoy painting. When I do that with the kids it brings a space of silence and a space of color and a space where we can breathe together without having to speak and still be connected to each-other. And then I walk at least 45 to 50 minutes a day very early before everybody wakes up.

What work is keeping you grounded?

AfroResistance is keeping me grounded and not just because it’s a really amazing organization but because it’s committed and it’s finding people that are equally committed to transforming people’s lives. What excites me and really motivates me and grounds me is that we are really helping Black Women and Girls to examine who they are and to expand their possibilities. And we know that when we do that we can change the trajectory of a whole family. It can transform a community. We have a children’s anthology of stories and we committed to paying the authors. And the kids are going to get paid. It makes the adults in their lives [take note] and it also gives the kids a sense that ‘I’m an author’ and that changes a perspective. We know that. One of the authors has written nine stories now because she really knows that she’s an author.

It’s a privilege … to be able to live in the way that you want to live without having to compromise something. And right now I’m not compromising anything. I could be really committed to social justice and liberation and everything else and I have to work for a horrible boss. And that is not a privilege not everybody has, but right now I’m living it.

What is the biggest global piece of the puzzle that US leaders need to connect to?

The biggest piece is always Haiti. Know its history and the role that Haiti has played in the region. If activists, lawyers, and attorneys, if people really get grounded in the history of Haiti in the region, it would give visibility to the plight of Haiti but it would also expand … the realms of understanding of Black migration and our relationship to race.

People should also really examine the role that the US has played in Colombia and the impact that has had on the world economy and the global environmental rights and justice movement and on migration because Colombia has the largest internally displaced population in the region. It has impacted farmers because of free trade agreements.

And how can we not talk about what has historically happened [in Brazil] in regards to Black people there? About the favelas etc? If organizers wanted to get innovative ideas and strategies, they would have to partner with favelas, its people, its way of organizing, community building?

What is the advocacy piece that you’re building into your work with AfroResistance?

For governments to be accountable to Black people, period. But also for people to pay attention to Black migrants. The crisis that’s happening with migrants throughout the region is something that’s given very superficial attention, and the people who are getting NO attention are black people. There’s a crisis with African women who are migrating and being stuck in between borders like Panama, Colombia, Costa Rica. How are we not paying attention to those from the Democratic Republic of the Congo and their trajectory in the region. What about the hundreds of Haitian migrants in a very precarious situation? There’s been a very conveniently invisibilized aspect to migration … We are really pushing the different working groups at the UN level.

Racism is embedded into every aspect of society … so we can imagine that even in groups of mixed groups that are migrating together there is harm to black people. There are Nigerian communities that have formed in Mexico because they have been denied entrance at the border to the US. But the violence they have experienced there, they have never experienced before – not even in warlike situations in Nigeria. And this is where as a Black woman from Latin America I know there has to be an acknowledgment of the racism that exists – centering these stories to create systematic change.

PrevPreviousMake It Mean Something
NextYear of the WomXN: A Conversation with Charlene CarruthersNext