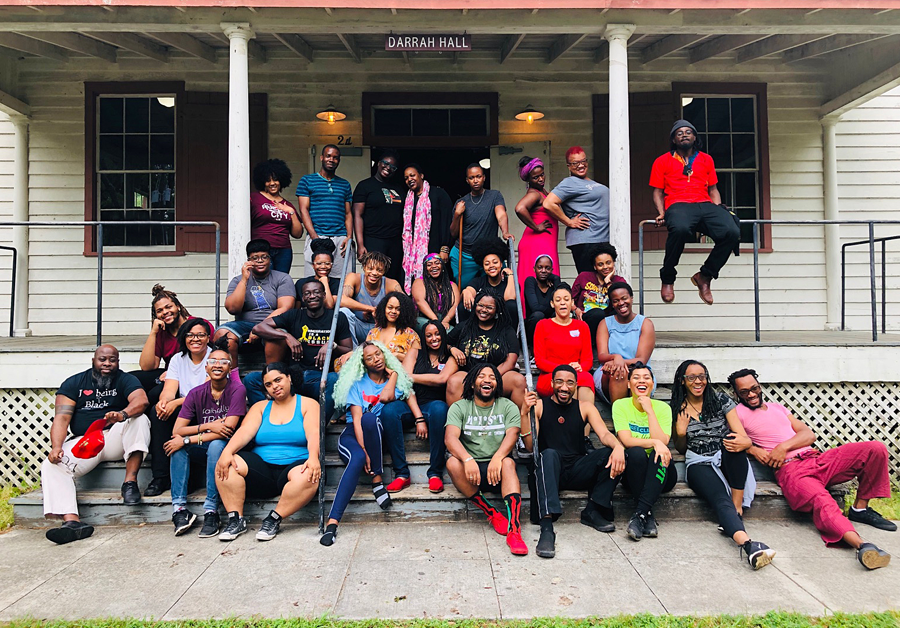 This past April, in South Los Angeles, social justice leaders from 21 organizations working on land and housing, mass incarceration, economic justice, and other critical issues completed BOLD’s Amandla! Fundamentals of POWER training. A second cohort completed the training in South Helena, North Carolina. A third cohort in DC embarked on their Amandla journey in June.

The name of the program came from Thomas Assefa, a BOLD organizer with roots in Ethiopia, who saw the relevance of Amandla, which means “power” in Zulu and Xhosa. During their liberation struggles, South African freedom fighters and activists dispersed throughout the continent rallied around the universal slogan. This year, the name of the training held a special resonance for participants in South Central as the wider community mourned the loss of slain rapper, entrepreneur, and activist Nipsey Hussle — also of Ethiopian descent.

Part One of BOLD’s Amandla! program (“Fundamentals”) shepherds frontline organizers through a process designed to deepen their skills in organizational development, strategic communications, fundraising, and political education, using a curriculum that breaks from traditional approaches to organizing. Part Two (“Praxis) assigns up to 30 organizers every year to work together in their assigned cities, at a BOLD alumni organization where they implement their new skills by applying them to a specific issue-based campaign.

The unique methodologies seek to elevate personal transformation over “transactional” organizing; to offer an alternative to norms that have depleted the strength of individual organizers and mapped power but not restored it to Black communities. The BOLD model is distinguished by key components to define a new pedagogy that includes naming oppression, healing personal trauma, shifting consciousness-shifting, and repairing relationships.

“The US context of race is such a powerful tool of oppression that people are struggling with their own worth … so we need to be able to rebuild that and to change a system that has erased not only worth but power,” said Perry. “We know that for most folks, self-worth is at their core. We invite them to be vulnerable enough to work toward aligning their actions and relationships with values and desires for liberation.”

By creating a universal language for black organizing and adopting a more holistic view of the organizer, BOLD is seeking to fill the void that exists for spaces to build Black power authentically together — both within and outside of their respective organizations.

“The depth of risk, transformation, and satisfaction we are inviting Black folks into at BOLD requires a volume of trust, interdependent relationship, and precise, rigorous skill where we … encourage folks to take important leaps towards their longings for building collective power,” said Adaku Utah, a BOLD trainer  for the South Carolina Amandla! training.

“The philosophy is that we can’t change the systems and structures of society and sustain the change without also transforming ourselves,” said Perry.

Ultimately, building coordination in action — not just strengthening individual change agents — is the most impactful aspect of BOLD’s work. Successful participants have been invited to the Part Two, Amandla! “Praxis”, training in November 2019. There they will receive continued training in organizing and political education and work together on community campaigns. This is part of BOLD’s commitment to an ecosystem sustained through the reinforcement of power, unity, theory & praxis within a community of organizers.

BOLD’s mission is to facilitate social transformation and fundamental improvements in the lives and living conditions of Black people by building the social justice infrastructure and strengthening Black leadership.

For participants in the Los Angeles training, bearing witness to the strength of the South Central community as it memorialized its leader, Nipsey Hussle, offered an attainable vision. They watched as Black community members managed a procession of thousands of mourners, police fell to the sidelines, and gangs put down their weapons for the day in honor of the selfless service and Black love that Hussle represented.

“This experience made it crystal clear how important Black leadership is and why we are committed to making room for it to flourish, to make room for lasting transformation,” said Perry.

*Nyasha Laing is the new editor for BOLD’s newsletter. You can find out more about her work and her commitment to building power and changing narratives across the African Diaspora here.